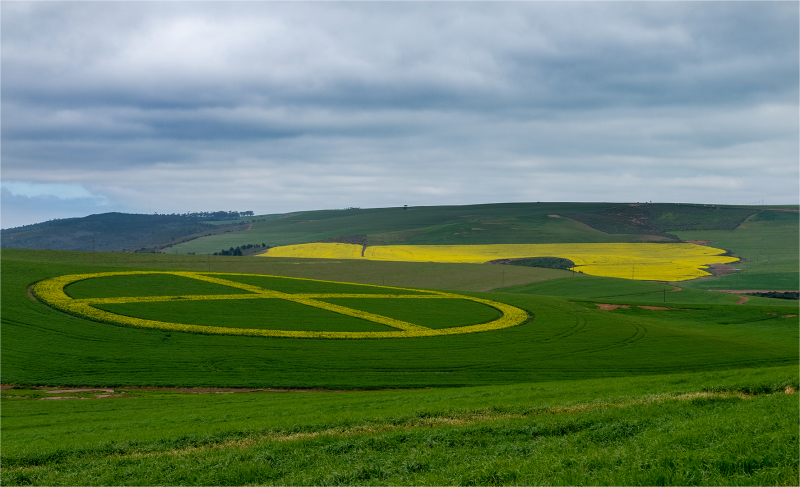 Jacqui and I recently took a short drive to a little town called Caledon. I was specifically looking to take some shots of the canola fields, and when we left home the skies were clear and blue. On the other side of Sir Lowry's Pass, however, Cape Town weather did its normal trick on us and the skies were covered in cloud. But we continued anyway. On our way back, we came across this delightful scene. So we stopped and took some shots, having no idea what was going on. And then on Friday I received a message from one of my friends who was listening to an interview on a local radio station and she managed to record most of the interview and attached the clip to her message. I was then able to use Google to find out more. If you are interested, you can read about the project by clicking on this link. Amazing stuff.

@Ronnie 2¢: Certainly helped from the skies! On the interview I heard that the tractors were programmed with Google earth to get the patterns - steered themselves during the ploughing and planting!

The curse of the crop circle strikes. Just about the right size for a UFO landing pad :)

Your link about this picture was interesting. I think a landscape art project is a great idea. I like your title for this image.

@Shaun: Umm - one of the few people who read the stories behind the images! And thanks for the comment!