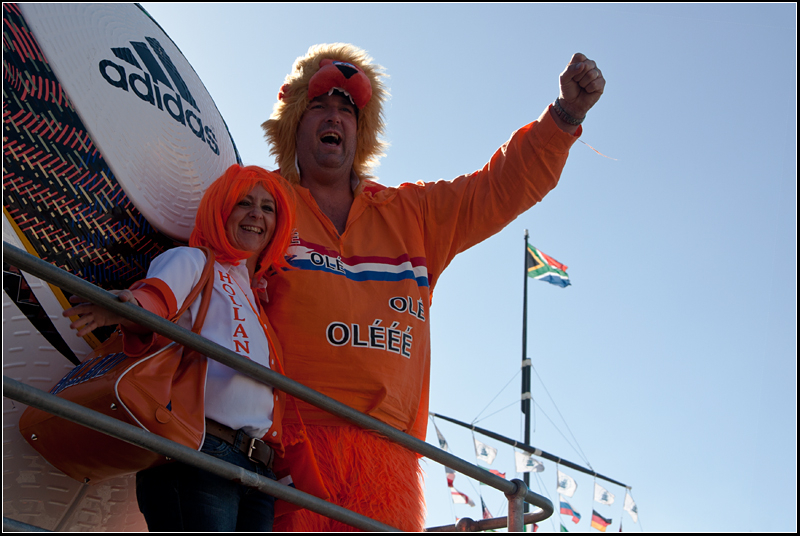 One more mile to go

I did say that I was going to post a final shot today relating to the 2010 Soccer World Cup, but I lied! There is a shot today, but there are still a few more to follow! Especially after our visit to the Cape Town Waterfront today.

Jacqui and I went through to the Waterfront today, basically to get a few shots of the fans (the semi-final between The Netherlands and Uruguay was scheduled for 20h30 later in the evening), and then to just enjoy a quiet beer before we went off home again. Tried to get tickets for the match, but at R4,200 each, we decided the television option was the way to go - especially when the remaining seats available at that price were dreadful!

The vibe at the Waterfront was just amazing - great to see the fans from the opposing teams all decked out in their colours and enjoying the moment with one another! Lots of banter and laughter, to be followed by more joy and laughter, but also tears and sorrow a bit later in the day!

The fans that have visited South Africa's mother city have been superb - thank you all for making it so special for all the locals. We hope to see you back sometime.

I waited until after the match to post the photo, and this shot is of two of the fans of the victorious side tonight, the Netherlands! Well done, and good luck for the final match this coming Sunday! Go Oranje!

Title from the song by Chris de Burgh

I'm soooooo glad they are in the final! It's about time! Great shot!

They Played well and deserve to be in the final, great shot of these fans

Nice to hear there was no hooligalisme,and you enjoyed the game! :)
Indeed óne more mile to go ...:))

Great shot Rob:-))
Hope everyone has a great time on sunday too!