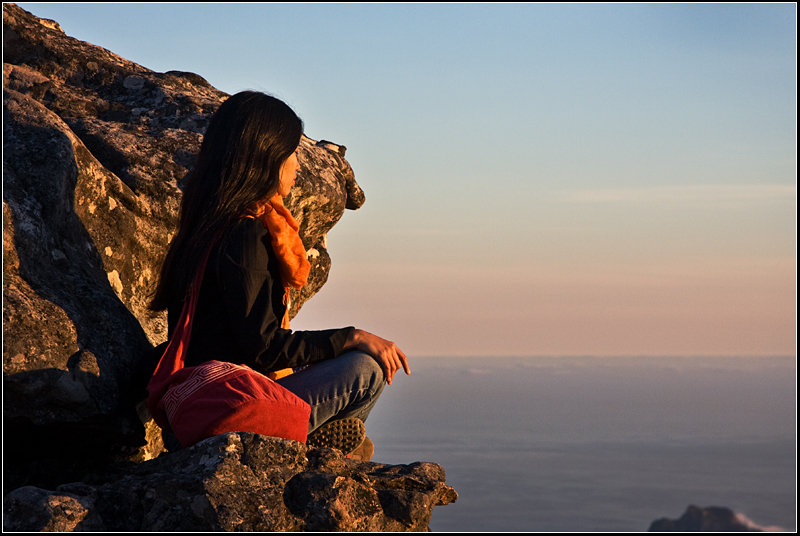 Top of the world

If one wants to take photographs of the sunset from the top of Table Mountain during the winter months, one is limited to a fairly short period when the sun sets before 18h00. This is because the last cable car down from the mountain departs at that time.

On Friday (two days before the winter solstice), Jacqui and I took the trip up the mountain, specifically to watch and photograph the sunset. The Friday morning was very clear, but when we went up in the late afternoon it had already become a bit hazy, so a lot of the distance shots unfortunately didn't come out.

However, we were admiring the view and enjoying a quiet glass of sparkling wine at a spot quite close to where this young lady had settled down for a short period of reflection and meditation. She saw me taking photos of her and obviously didn’t mind – maybe she knew I would end up with a special photo that would turn out to be one of my all-time favourites. She looks so peaceful and serene there and the rays from the setting sun just add that something extra to the whole scene. So imagine yourself there, 1085 metres above sea level, not a breath of wind, cool but not cold, with a view to die for - bliss.

One can't really get a sense of how high up we were, but tomorrow's post will give a better perspective. In the distance, one can see the Atlantic Ocean.

Shortly after I had finished taking my photos, the lady came down from the rock, handed me her camera, and then asked me to take a few photos of her sitting there. I hope they came out as nicely for her as this one did for me.

Title from the song by The Carpenters

@Lylou & Roland: Thank you so much!

A soothing place here too - love the light**

The photo is splendid in so many ways. I am glad you interacted with the girl..I bet she is impressed by the shots you took on her camera! What a portrait for her to have. Will look forward to tomorrow's shot then...

I see I missed an excellent selection while I've been out and about Rob. Lovely combination of sculptural rock and person here. Liked the macros and yesterday's almst abstract too.

Fantastic scene, Rob, and a great decision to wait for the gorgeous light!

The light is gorgeous!

When I lived in Paris I would sit on the edge of this bridge that overlooked Notre Dame. Reading in the setting sun was always my favourite thing to do there. One time a photographer came by and took 30-50 shots of me. It didn't bother me at all (in fact, I was a little flattered) - being a photographer myself I understood that a good subject is hard to find. I wish I had talked with him though... I would have loved to see his photos - I'm sure he got 1 or 2 good ones.

Your photo reminded me of my experience. This is a stunning image. Thankfully she got you to take some pictures with her own camera. Even if they're half as good, I'm sure she'll be pleased.

@Aaron Schmidt: Thank you, Aaron - your comments are much appreciated, and I'm pleased it brought back good memories for you.

Indeed it is a soul-searching portrait, how stunningly beautiful, bravo for this portrait, I feel more peaceful just viewing it ;)

This is exceptional . . a very powerful image full of meaning and significance. Beautiful.

Ah, so peaceful and serene. I feel her meditation, and the light is perfect. Thanks for sharing all of your narrative with the stunning photo.

Beholding the sea ! yes, a great and ideal place to entwine with natural elements, to get rid from noise and crowd.

Oh my, she looks gorgeous in that beautiful light. Excellent shot. So serene.

a wonderful shot. i can feel the freedom :)
great!

Very cool shot! I wonder what the view from up there must be.

Magnificent shot, the setting and the serene model, has a zen feel to it all. Nice one, Rob.

A beautiful and peaceful portrait. The light is fantastic.

What a great shot! The incredible light and her posture make it!

What a wonderful opportunity to make such a shot. Inspiring capture!

A stand out image, Rob. Wonderful composition, light and mood. I enjoyed reading your accompanying note, too.

perfect picture ! I love it

Very nice one, I love the compo, it's really great!

this is totally GORGEOUS!! and how awesome!! it looks to be simply a magical place!! a great height and view too!! bravo!!

Wow! This is really excellent. Just a wonderful landscape/portrait.

@MARIANA: Thank you Mariana - much appreciated.

Wonderful portrait! The light is marvellous!

@ManuelaR: Thank you so much!

Since making a Comment, we see you hit the Spotlight - Congrats, Rob !!

@Lilly and Ronnie 2¢: Sincerely - thank you for coming back and commenting again - much appreciated.

Outstanding! Incredible place for sipping wine or meditation.
Congratulations on making it to the AM3 Spotlight.

@Barbara: Thanks Barbara - you know what it feels like, so you know I really appreciate your visit!

Congratulations on making the Spotlight ... this is an exceptional image and your text adds to it.

@Judy: Thanks Judy - and especially after all you have been through recently, I really appreciate your visit and comments.

@Bonj: Thank you very much for your kind comment.

@dj.tigersprout: Thanks DJ - you are a star!

Beautifully shot, the light from the evening sun is just gorgeous.

A superb shot Rob, and a belated congrats on making the spotlight page.

Just beautiful; what a feeling of serenity.

I've seen some of your splendid work, and also had the pleasure to catch the view from atop Table Bay, and I thought you could do better, really. There's too much distraction behind the lady, and a different vantage point could've got much more of the open sky in the frame, I think.