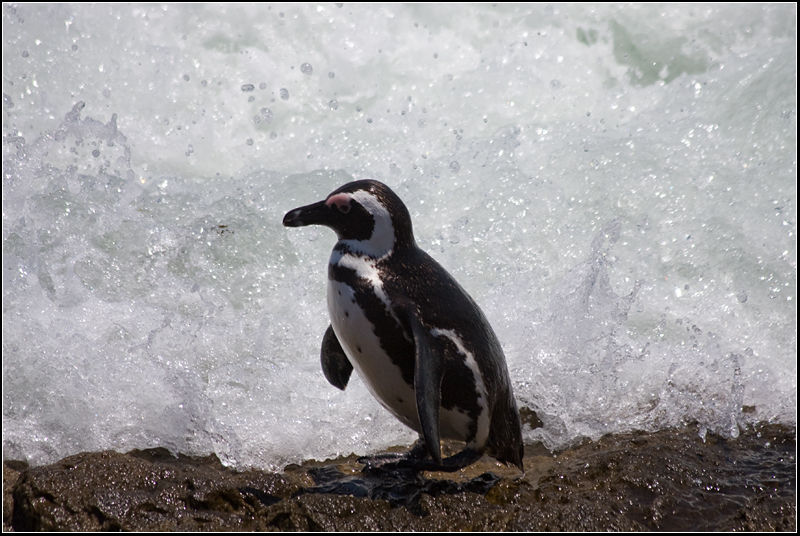 So - Friday saw us back at Stony Point to get some photos on what was supposed to have been a glorious day. At 8 o'clock in the morning, our favourite and most accurate weather website, Windguru was showing zero cloud cover at 11 am, with a temperature of 24 degrees Celcius. Well, it turned out to be 16.5 degrees, and admittedly there was a tiny bit of blue sky when we arrived, but then the cloud and mist rolled in and completely obliterated every last bit of it! So we didn't quite get what we were hoping for, but I am still going to post a selection of photos this week from the two trips we made.
This little guy had just been dunked by a fairly vicious wave and thrown against a rock or two, but had just got out and was proudly walking unafraid right alongside the next challenge from the sea. Both Jacqui and I were quite amazed how these little things live through the battering they take against the rocks.
Title from the beautiful song by Chris de Burgh

Brilliant shot Rob, you have really frozen the water behind the bird.... lovely image.

Great shot with the contrast between the foam and the bird.

I like how you've captured the details of the water behind the bird - and he is adorable!!!! Sorry the weather didn't cooperate, but this image turned out great anyway.

Wonderful story and look at this little guy, you photographed him wonderfully :)

excellent capture ! the DOF is perfect !

Great shot, the action of the waves is fantastic

Shows what a good Evolution can accomplish ! I like how you seem to have caught him in mid-challenge.

wonderful capture of this clearly resilient guy,
you know I think I made a wrong career choice so many years ago I should have got into weather forecasting no-one really expects you to get it right all the time, or even that often

@JJ: Rofl! Jacqui and I have worked out how the tv forecasts are done - at the beginning of the week there are 7 cards each with a different forecast on it. They then shuffle the cards and just read them out in the order they came out after being shuffled!

ehehe these felows are funny, nice one dob!!.

The penguin looks so isolated against that well caught background. An excellent nature shot.

So fragile, given the powerful sea.

a stunning shot! and a faaabulous still of raging water! divine!!!